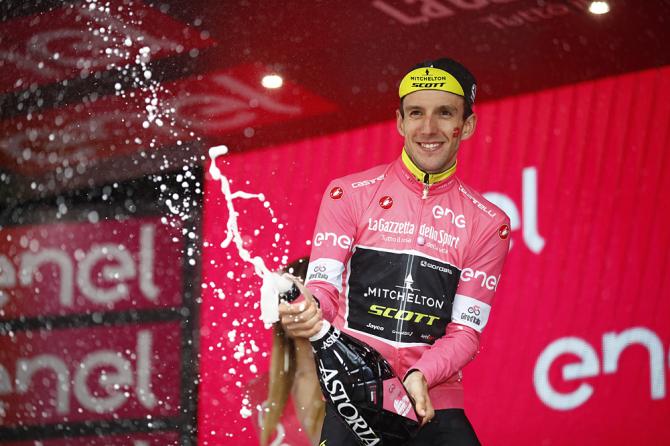 The Giro d’Italia’s 34.2km time trial stage from Rovereto to Trento saw Simon Yates (Mitchelton-Scott) keep a firm grip on the maglia rosa as Tom Dumoulin (Team Sunweb) managed to pull back just 1:15 of his 2:11 deficit in the overall standings. Yates will wear the race leader’s pink jersey for an 11th day during Wednesday’s flat stage to Iseo and now leads Dumoulin by a reassuring 56 seconds.

The Giro d’Italia appears to be a two-horse race between the Briton and the Dutchman, with Yates in the driving seat and Dumoulin now obliged to go on the attack in the Italian Alps.

“At the moment, if I attack, he’ll attack me twice as hard, so I don’t know what the plan is going to be,” Dumoulin said somewhat dejectedly after the time trial. “Of course, I have no other option. I’m not giving up – of course not.”

Yates also remains cautious as this is his first real shot at overall victory in a Grand Tour. He has dominated the race so far, winning three stages while wearing the maglia rosa for 10 days, but will keep all his rivals under control and hope he doesn’t struggle in the final Alpine stages.

“Anybody within, say, 10 minutes is a danger,” Yates said when asked if he considers Chris Froome (Team Sky) back in the fight after his excellent time trial.

“This is the Giro. A lot of strange things happen. You never really know. so we’re all going to keep on our toes for everybody. I won’t be safe until Rome, as anything can happen: bad luck, a bad day. I’m aware that can happen. I’m just praying it doesn’t.”

Lower down the overall classification, other battles are likely as riders fight for the final podium spot behind Yates and Dumoulin, and the best possible place in the top 10. UCI WorldTour points are also precious and the Giro d’Italia offers a significant haul that boosts contract value and their team’s place in the WorldTour.

The different time trialling ability amongst the overall contenders sparked a game of snakes and ladders between fourth and 11th places.

Fabio Aru (UAE Team Emirates) produced a surprisingly spirited fight-back in the time trial after a series of recent dire performances in the mountains. However, he remains 22nd overall and only made the headlines after he and two other teammates were penalised for drafting.

Domenico Pozzovivo is now Italy’s only hope for success in this year’s race, in third place overall. He lost 43 seconds to Yates, 1:58 to Dumoulin and 1:45 to Froome, who is now fourth overall only 39 seconds down on Pozzovivo.

Pozzovivo, or ‘Mimmi’ as he is known within Bahrain-Merida, is soft-spoken and avoids social media, and is studying for his second degree as he races professionally. Yet he expressed his frustration when Aru’s struggles on the Zoncolan were given more space in the Italian media than his third place behind Froome and Yates. He is ready to stick out his chest in pride and fight off Thibaut Pinot (Groupama-FDJ) and Froome for a spot on the final podium in Rome.

“I’m convinced I can have my say. Last year I was up there right until the final climbs, and so why shouldn’t I be this year? I think I can again be a protagonist,” Pozzovivo said.

“I’m convinced the Giro will be open until the stage to Cervinia on Saturday. We’ve still got three mountain finishes and two of them are tapponi – big, testing mountain stages with multiple climbs.”