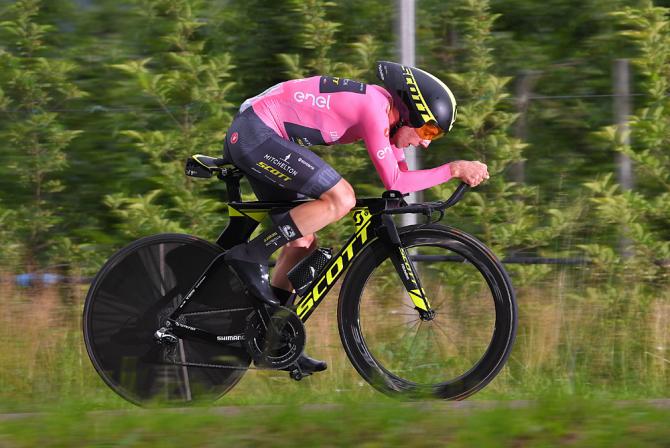 Race leader Simon Yates (Mitchelton Scott) crossed the line in a time of 41:37 to limit his loses against defending champion Dumoulin. The British rider conceded time at each time check, and although he finished outside the top 10 in 22nd place, the only numbers that mattered were the one minute and 15 seconds he lost to Dumoulin.

With several mountain stages still to come, Yates leads his Dutch rival by 56 seconds. Dumoulin is now the only rider within three minutes of Yates on GC, with Italian hope Domenico Pozzovivo (Bahrain-Merida) in third at 3:11.

Chris Froome (Team Sky) put in a consistent performance to finish finish fifth, 35 seconds down on Dennis. The four-time Tour winner moved up to fourth overall as a result, with Thibaut Pinot (FDJ) having a poor day and dropping down to fifth. Fabio Aru (UAE Team Emirates) put in a storming ride to finish 34 seconds down on Dennis, but was later penalised 20 seconds for drafting, as were two of his teammates. Valerio Conti and Diego Ulissi were each docked two minutes.

Dennis’ result moved him back into the top 10 and sixth overall at 5:04.

“Obviously I wanted to come here and win a stage, and I was hoping for Israel to be that stage, but this was a big target as well, so to come here and repay the team for all their hard work and jump back into the top 10 is a big day for me,” the stage winner said at the finish.

Dennis has ridden a mature race to date, and has saved his power in the mountains without going into the red. That consistency leaves him on course to record his best-ever result in a Grand Tour. However, with a week of mountains between now and the finish in Rome, he is taking nothing for granted.

“Basically, I just have to hold on for as long as possible,” Dennis said. “There are going to be guys going crazy in the last week, some guys will be hurting, I’ll be hurting too. It’s an unknown for me, riding the mountains in the third week, so I’m going to take it each day and just try and hold onto that top 10.”

For today, though, Dennis could afford to smile and put aside the burden of GC responsibility. This was a performance that reinforced his position as one of the best time trialist in the world, and over a fast-but-demanding course, he set about beating all the intermediate time checks. The Australian national champion was quicker than both the early pace setters, Martin and Jos van Emden (LottoNL-Jumbo), but there was still plenty of firepower to come when the overall contenders rolled down the start ramp.

The GC battle rages
Chris Froome was looking to find another Zoncolan-style performance, and although he looked efficient throughout, he was never quick enough to trouble Dennis. At the first check the Team Sky leader was 24 seconds off the Australian, and while he rallied in the second half of the test, as the road become more undulating, he was always limiting his loses to the man in green and gold.

Pinot flops as Aru shocks
If Froome was consistent, then the likes of Pinot and several of the other top-10 riders were disappointing. Pinot finished 66th and 3:19 down on Dennis, and while he only dropped one place on GC, his hopes for the podium are fading. Miguel Angel Lopez was eclipsed by his teammate Pello Bilbao to finish 2:47 down, while Richard Carapaz (Movistar) finished a further 10 seconds in arears. Pozzovivo held his own, losing less time to the specialists than many had predicted, but the time he gained on Pinot made his day a success. The Italian has 39 seconds over Froome in the fight for third, with the mountains still to come.